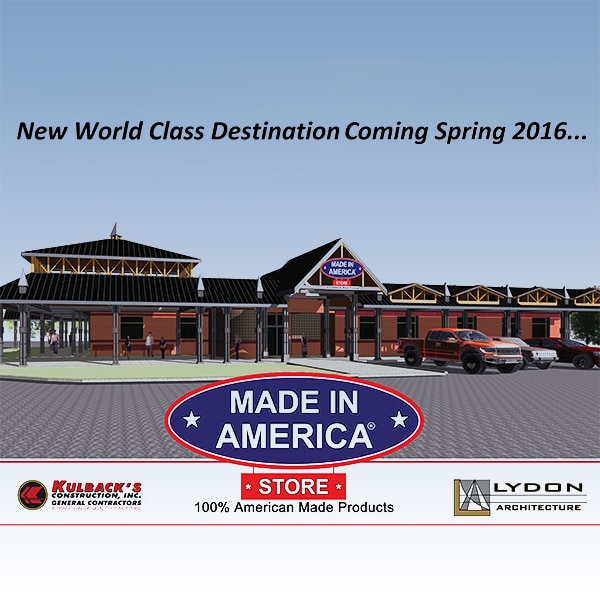 On a sunny, late summer afternoon, Mark Andol – Founder and CEO of the Made in America Store – led a groundbreaking for his latest project, the new flagship store at 1000 W. Maple Court in Elma.

From Day One, we have been focused on our mission to save and create jobs in the U.S. for country, for soldier, for American worker and for our children’s future.

“Today’s ground-breaking to build a World Class Destination was made possible by the loyal support of our customers in Buffalo Niagara and across America.  Tomorrow, we will host four tour buses – three from Missouri, and one from Chicago – all demonstrating the power of consumers to create jobs.”

The new Made in America Store is scheduled to open May 2016, just in time for peak tourism season in Buffalo Niagara.

With an excavator in the background, Andol thanked Kulback’s Construction and Lydon Architecture for coming up with an innovative building concept that fits Andol’s goal of creating a World Class Destination that is part of Buffalo’s Renaissance.

“I also want to thank my engineering, operations and welding team at our parent company, General Welding & Fabricating, who are producing the structural and decorative steel components of this construction project,” Andol added.

The 3 p.m. groundbreaking was followed by a Fall Festival next door at Andol’s original flagship store at 900 Maple Street.  Featuring Krolick’s fish fry (a Buffalo tradition), vendor marketplace and free concert with three bands, net proceeds from the event will benefit the Music 4 R Vets Program.

The first Made in America Store opened on April 3, 2010.  It now has five brick and mortar stores in Buffalo Niagara inNew York State, three e-commerce sites and more than 100 mobile locations locally and beyond.  The store currently helps support manufacturing among 450 suppliers in the United States.

ABOUT THE MADE IN AMERICA STORE

The Made in America Store offers guaranteed 100% USA top quality products ranging from Toys, Clothing, Food, Gifts, Camping Goods, Sporting Good and more! This is the first brick and mortar store, come support your local business and fellow American’s. Your Freedom to Choose is Your Power to Change!

THE MADE IN AMERICA STORE

Boeing Planning To Build a Factory in China?