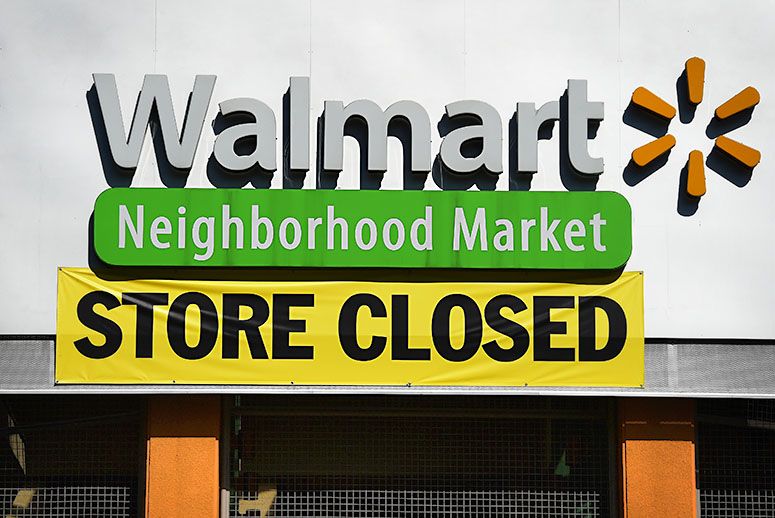 When and where Sam Walton’s Walmart opened, a slow hollowing out of the town square surely followed. When the Fairfield store opened in 1986, our town square was home to a clothing store, a small department store, a furniture store, a pharmacy, a jeweler, two hardware stores, and many others. As the county seat, Fairfield’s retailers not only supported its population of 10,000 but also residents of tiny neighboring towns, such as Salina and Libertyville, where only a few hundred people lived. Today, only one of those stores remains—a symptom of what’s come to be known as the Walmart effect.

Research conducted at Iowa State University in the 1990s found that, after mega-store opened in a town, sales at specialty stores—sporting goods, jewelry, and gift shops—dropped by 17 percent within 10 years. In neighboring towns with fewer than 5,000 people and no Walmart, specialty-store sales dropped by 28 percent within a decade. For clothing stores, sales dropped by 28 percent in Walmart and non-Walmart towns alike. Some stores simply were no longer around a decade later.

The original Fairfield store closed to make way for a Walmart Supercenter in 2012, which added a supermarket to its comprehensive retail offerings. But with the recent wave of store closings—154 locations across the country are being shuttered, with a majority closing their doors for good last week—a new kind of Walmart effect is emerging. According to an investigation published Thursday by The Associated Press, Walmart closures will create three new food deserts, affecting some 15,000 people in Arkansas, Kansas, and Alabama. Furthermore, “another 31 neighborhoods in 15 states will lack any place that sells fresh produce and meat once the last of the Wal-Mart stores slated for closure turns off the lights Feb. 5.”

In the 40 years after the first Walmart opened in Rogers, Arkansas, in 1962, the number of retailers in the U.S. selling just one thing—clothes, hardware, etc.—declined by 55 percent. It wasn’t only Walmart that was pushing them out, but it’s without a doubt big-box retail chains that have replaced those closed stores. In the same time period, the number of retail chain store locations nearly doubled, leaving towns like Coal Hill, Arkansas, one of the newly minted food deserts, with little to fall back on. As the AP reports, residents will now have to make a 15-mile trek to the nearest supermarket or pharmacy. 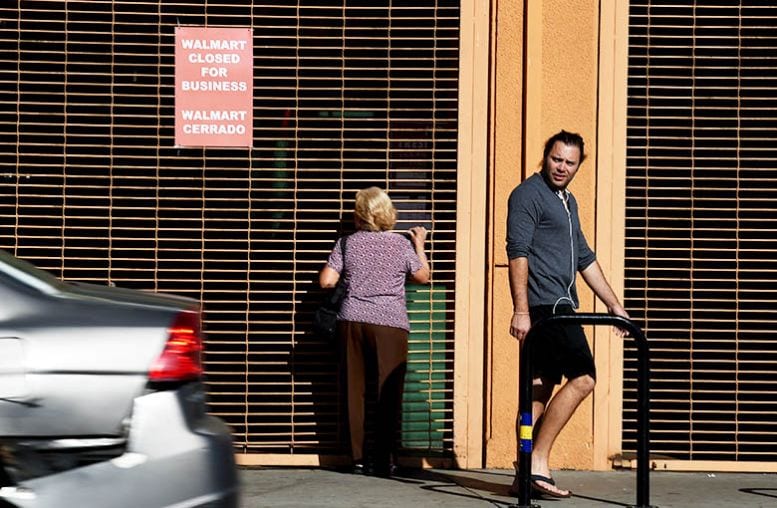 A woman looks in at a recently shut down Walmart store in Chinatown, in Los Angeles, that is part of the closure of 154 store locations across the United States. (Photo: Mark Ralston/Getty Images)

The news looks particularly bad in light of Walmart’s involvement in Michele Obama’s Let’s Move! campaign, which has addressed food-access issues in its efforts to reduce childhood obesity. But the chain’s relationship with impoverished towns and neighborhoods is more complicated than the sad irony of these recent closures. Consider, for example, that opening a Walmart can potentially make a food desert situation worse, as a 2011 report published by Manhattan Borough President Scott Stringer found.

Furthermore, according to Americans for Tax Fairness, a coalition of progressive political groups, low-wage workers at Wal-mart cost taxpayers $6.2 billion in government assistance—including SNAP benefits that Wal-mart employees often spend at the same Wal-mart location where they work. The USDA doesn’t collect data on where food stamp recipients spend their benefits, but it’s estimated that 18 percent of SNAP dollars are spent at Walmart. The chain itself has even suggested that its business depends on the nutrition assistance program to a certain degree. According to a 2014 Securities and Exchange Commission filing, Walmart noted that “changes in the number of payments made under the Supplement Nutrition Assistance Plan and other public assistance plans” and “changes in the eligibility requirements of public assistance plans” could put a dent in its profits—some $16 billion in 2015.

For reasons unique to the community that lives there, Fairfield has managed to not become a totally Walmart-centric economy, depending on it for jobs and food. As small businesses on the town square folded, factories that employed hundreds of workers compared to tens were also shuttered—but that’s where the similarities of Fairfield’s narrative to other small Midwestern towns ends. Telecom companies (the dream of the ’90s, and so on) and, later on, tech and investment firms cropped up there, offering new employment opportunities.

Still, when I am back home to visit, there are things I just can’t buy—diapers for my daughter, cold medicine, and anything that needs to be purchased after 10 p.m.—without trekking out to the western edge of town. Fairfield certainly isn’t a closure away from food desert status, but as in so many other small and midsize towns, the chain has hollowed out a very large niche that can’t easily be filled.

TakePart is the digital news and lifestyle magazine from Participant Media, the company behind such acclaimed documentaries as CITIZENFOUR, An Inconvenient Truth and Food, Inc. and feature films including  Lincoln and Spotlight.